TOXIMET SECURES £1M OF FUNDING TO CONTINUE TO EXPAND 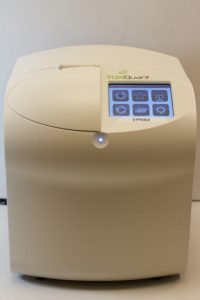 A start-up company based on the Kent Science Park has just secured over £1million of funding, in order to expand in the global market place.

ToxiMet, originally a spin-out business from the University of Greenwich, has developed the ToxiQuant instrument, a unique food testing system that can detect potentially fatal toxins in commodities such as rice, nuts, fruits, and maize. The ToxiQuant instrument was launched in May 2012, and has since then been sold in many countries worldwide, such as USA, China, Vietnam, Senegal, Georgia, and Italy.

The ToxiQuant instrument was developed by Professor Raymond Coker as a way to enable any company to easily, rapidly, and cost-effectively check for the safety of their food products, and is a platform technology with numerous applications. The first use of the system is the measurement of mycotoxins, which are toxins produced by fungi that can be found contaminating around 25% of crops worldwide. Mycotoxins have been proven to cause cancer and in high doses can be fatal. They are also responsible for up to 60% of food imports rejected at the European border.

Until now, companies that wanted to accurately measure the safety of their products had to use complex and expensive technology, such as HPLC (High Pressure Liquid Chromatography). Because of the complexity of HPLC, many companies would send their products to external laboratories for testing, costing a lot of money and taking several days to receive the results. In contrast, the ToxiQuant instrument has been specifically designed to be used by non-scientists, costs less than half the cost of an HPLC, and delivers results in just 40 minutes.

Dr Siro Perez, Chief Executive Office of ToxiMet, spoke about the recent investment in the business and what it will mean for the company:

“Despite the extremely difficult financing environment, this is the second time we have successfully obtained funding this year – back in May we received £700,000, which we used to successfully launch the ToxiQuant system at a major global congress in Singapore. The system was extremely well received and we secured a large number of orders from many countries around the world. Having proven the customer demand and global reach of the product, we have now raised another £1m to develop our global marketing and sales infrastructure.”

The development of ToxiMet means they will soon be taking on more staff at their laboratories on Kent Science Park. Site Director James Speck spoke about ToxiMet’s continued success:

“Ray, Siro and the entire team have done an extraordinary job developing and marketing their industry changing product. Their success is another example of science in action at KSP that has global implications.

“The latest investment in ToxiMet is wonderful news for Kent as they’re creating local jobs and bringing investment into the area. When ToxiMet relocated to KSP in 2011 they had four members of staff and they’re now closing 2012 with 20 employees, with the aim to employ more people in 2013.”

The growing pool of talent working at ToxiMet includes a number of ex-Pfizer and Abbott Laboratories employees and the company is growing so that there are both science and sales roles available. Dr Perez commented on why he felt ToxiMet had been such a success:

“When people are importing and exporting commodities such as nuts and fruits, the products have to be tested at every step of the journey. If at any point these commodities are shown to have unacceptable levels of mycotoxins in them, the whole shipment is rejected. The challenge was to develop a device that was easy to use and cost effective, while at the same time being extremely accurate, as international regulations require mycotoxins to be measured in parts per billion (similar to having to measure one second in 32 years!). So really the appeal of the ToxiQuant system is two-fold. One, it is cheaper for a company to buy the system and test their shipments accurately than to have a shipment turned away. And two, the system can drastically reduce the time it takes to test, making the whole import/export process a lot quicker and thus saving companies a lot of money on storage.

“Our aim is to continue to invest in our company infrastructure so that we can reach the point when we are a completely autonomous and self-funded business.”